ARM microctrollers (MCUs) are cheaper and more powerful than popular Atmel AVR MCUs (source, Russian). I’m familiar with AVR architecture and I have small experience of work with ATMega, but I want to study usage of ARM MCUs in real applications. If you have some experience in programming and working with some electronics this article may help you to start studying ARM platform.

Advanced RISC Machines Ltd. (ARM) is developing their processor designs which are allowed to license by various hardware manufacturers. ARM does not produce any hardware chips at all! One of the last ARM’s processors is Cortex family. It belongs to ARM v7 architecture and has 3 modifications (profiles): 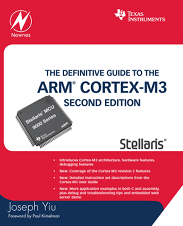 Cortex-M3 processor is based on one profile of the v7 architecture, called ARM v7-M, an architecture specification for microcontroller products. There’s “The Definitive Guide to the ARM Cortex-M3” (PDF, 15 MiB) — it fits perfetly for those who want to study ARM MCUs’ core.

One of ARM’s partners is ST Microelectronics. ST produces a family of 32-bit MCUs. STM32 F2, STM32 F1 and STM32 L1 series are based on Cortex-M3 core. Like other manufacturers ST surrounds Cortex-M core with a bunch of peripheral circuits giving I/O abilities and various features like timers, ADC, temperature measurement and so on. These peripheral devices are specific to each manufacturer. ST has a range of tools for evaluation of their MCUs. They’re not very expensive and give you ability to try some of chip’s features without soldering a single wire.

My friends gave me 32L152CDISCOVERY—STM32 Discovery kit which has on its board:

Last few days I’ve spent trying to configure work with my Discovery board on Ubuntu 16.04. In this article I’ve described set up of the following toolchain:

I like this setup so much because it has no proprietary tools in it, I have a full control over each step of board programming and such configuration is pretty common and production-ready.

If you still haven’t installed Eclipse CDT, do it right now.

First of all, install Java.

To make Eclipse available from launcher we should create shortcut (courtesy to UbuntuHandbook and Ask Ubuntu 1 2).

Paste the following content to the opened file and save it.

Now you should be able to open Eclipse from Unity Dash. I’ll assume that you place your Eclipse workspace here: ~/workspace/ 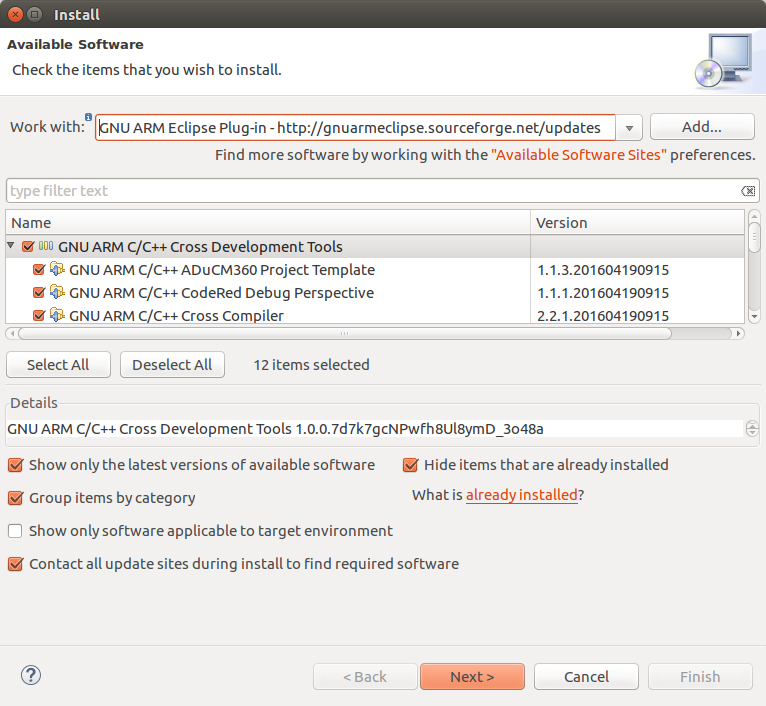 How to make Eclipse launch the same debug configuration each time?

You should go to Window > Preferences > Run/Debug > Launching. Select the option “Always launch the previously launched application”. It’s located at the bottom of the dialog. Courtesy to Stack Overflow.

We’re going to compile on our machine MCU’s flash having another processor architecture. This is called cross-compilation. To do that we need special toolchain. Installation is straight-forward for every Ubuntu user.

If installation finished correctly you should be able to test toolchain’s version.

If this command ran correctly, toolchain lays at /usr/bin/. In case when toolchain lays in other place you should specify its location in Eclipse here: Window > Preferences > C/C++ > Build > Global Tools Path.

OpenOCD is a tool for debugging hardware. Ubuntu has pretty fresh OpenOCD v0.9 in its repos now.

In this section we’ll make our board blink with its LED. Eclipse GNU ARM Plug-in has a set of STM32 F-series “hello world” example projects. We need to modify one to test our Discovery board equiepped with STM32 L1-series MCU.

In Eclipse open File > New > C Project. Choose some Project name (I’ll use stm32-l1-blink name below) and Project type: “STM32F10x C/C++ Project”. The toolchain should be “Cross ARM GCC”. Press “Next”. On the following wizard’s page choose Flash size: 256 kB, RAM size: 32 kB (that’s our STM32L152RCT6 MCU parameters), all other fields leave without changes. Go through the wizard pressing “Next” to the “Finish”.

Let’s try to build the project to check if toolchain works. Press Project > Build All (Ctrl + B). When compilation finish, you should see Binaries/stm32-l1-blink.elf MCU flash. Compilation works but we should modify the source code.

“Hello world” generated by Eclipse contains library for working with STM32 F10x peripheral devices. You can download such library for STM32 L1 series from official website (you’ll need registration) or my copy (ZIP, 18 MiB, v1.3.1). Unpack it to “home” (assuming you’ve downloaded it to ~/Downloads/):

Peripherals library now unpacked to ~/STM32L1xx_StdPeriph_Lib_V1.3.1/. To merge it with our project you should do the following (assuming your Eclipse workspace is at ~/workspace/): 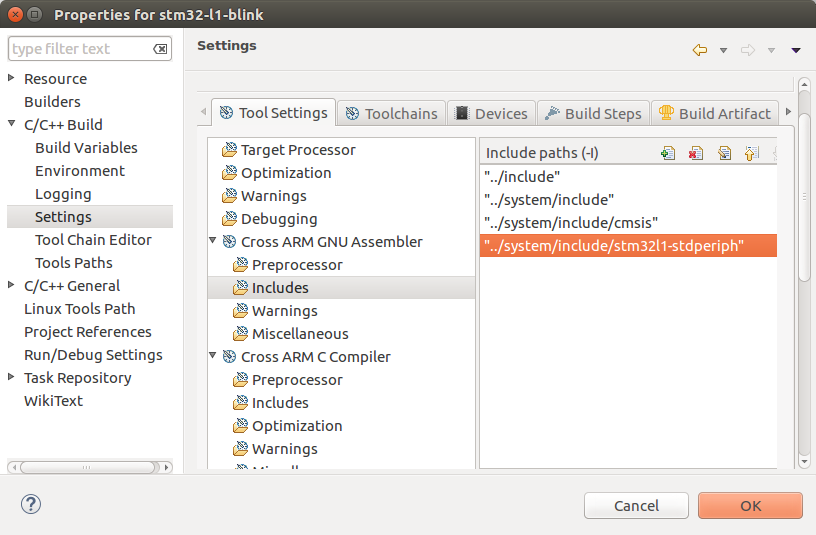 We still can’t build the project because of slight differences between STM32 F1 and STM32 L1 peripherals’ libraries.

Edit include in the header of BlinkLed.h:

To understand what’s going on in this function read article about STM32 F0 GPIO. To understand STM32 L1 GPIO’s peculiarities I encourage you to look at STM32 L1 reference manual. You’re able to download it from official website or use (PDF, 13 MiB, v13).

After this modifications the project can be built without errors. 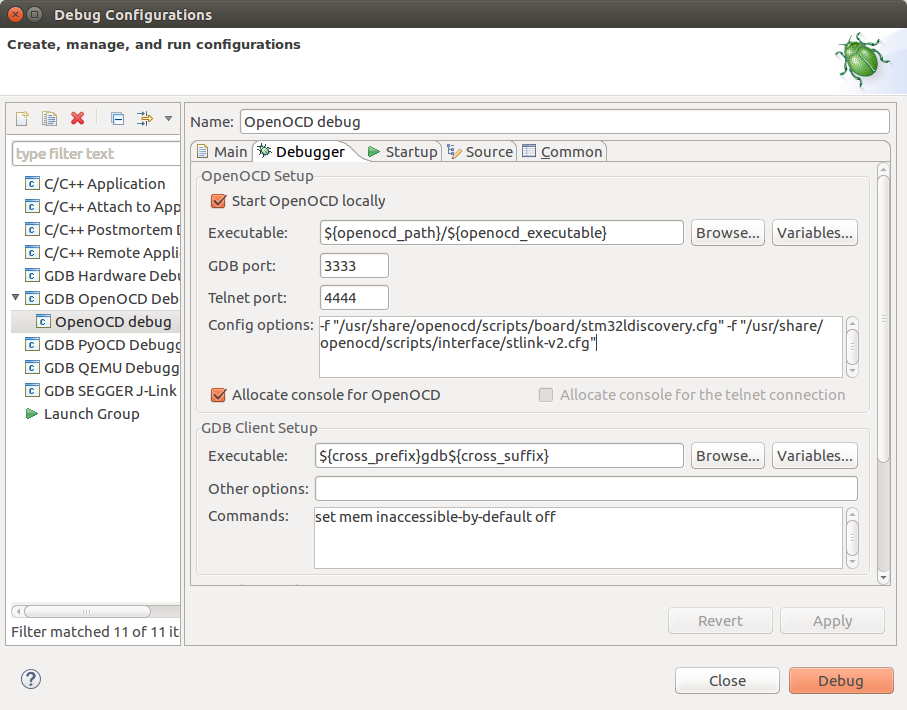 Now, if you press Debug button your board will be flashed and interactive debug session will be started. You’re able to download my stm32-l1-blink project (ZIP, 609 KiB) if any.